Hearing is critical in the first few years of life for social, emotional, and cognitive development. Untreated hearing loss can cause permanent language delays and learning disabilities. Even a mild or partial hearing loss can affect a child’s ability to speak and understand language. Hearing problems can be treated if they’re caught early, so it’s important to get your child’s hearing screened early and evaluated regularly. The Sun City West pediatric audiology staff at Metro Hearing has been specially trained to diagnose and treat hearing loss in children age four and older.

This involves careful observation of a child’s behavioral response to sounds like speech and pure tones. The behavioral response might be an infant’s eye movements, a head-turn by a toddler, placement of a game piece by a preschooler, or a hand-raise by a grade schooler. Speech responses may involve picture identification of a word or repeating words at soft or comfortable levels.

Tympanometry is not a hearing test but a procedure that can show how well the eardrum moves when a soft sound and air pressure are introduced into the ear canal. It’s helpful in identifying middle ear problems, such as fluid collecting behind the eardrum. 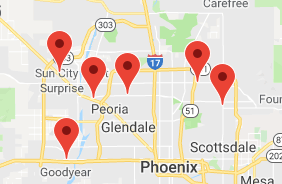